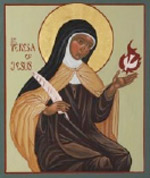 The Carmelite Order developed from a single community of hermits, who lived on Mount Carmel in Palestine in the early days of the thirteenth century. The Crusades had freed the Holy Land from Moslem hands and Christian pilgrims were free to visit the places of the Bible. Many of these hermits had been chaplains for the Christian armies from Western Europe.

Following the example of the prophet Elijah, a holy and solitary man closely associated with Mount Carmel in the Bible, this small group of pilgrims, merchants, crusaders and soldiers were seeking to live a simple and solitary life in allegiance to Jesus Christ with the special patronage of the Blessed Virgin Mary. This community of Western European Christians, called the Brothers of the Most Blessed Virgin of Mount Carmel, was given the Carmelite Rule of Life by St. Albert, Latin Patriarch of Jerusalem, between 1206 and 1214 AD. The Rule was approved by Pope Honorius III on January 30, 1226.

Due to developing hostilities from the Saracens in the Holy Land, around 1239 AD the hermits began migrating from Mount Carmel to begin establishing communities in various parts of Europe. In 1247 their rule of life now solemnly confirmed by the Holy See, was adapted to meet the needs of an Order spreading throughout Christendom. In the course of the second half of the thirteenth century, circumstances conspired to lead the Carmelites ever further from their hermit origins, and they finally became a mendicant order, though their old way of life was not forgotten and never completely died out as it was ever present to them in their Rule. The mendicant Orders sought to live a spirituality and exercise an apostolate that grew out of the community life they now lived.

Reform of the Carmelite Order

In 1562, a Spanish Carmelite nun, known to us as St. Teresa of Avila, was assisted by another great Carmelite, St. John of the Cross, to establish a completely new branch of the Carmelite Order, the Discalced Carmelites. "Discalced" comes from a Latin word meaning "unshod", and they were so called because the most distinctive thing about their appearance was the fact that, as a sign of their more austere way of life, they wore the rope sandals of the poor in place of leather shoes. The Discalced Carmelites, both nuns and friars, aspired to a more ascetic and contemplative form of life in keeping with the spirit of the original thirteenth century rule.

Thus it is that today there are two branches of the Carmelite family; the Ancient Observance (O. Carm.) and the Discalced (O.C.D.). In addition to those called to the priesthood or those called to the religious orders or congregations, each branch has its own Secular Order.

For many centuries there have been lay people and also some diocesan priests, who have felt drawn to associate themselves with a religious order. The monastic orders admit such men and women as Oblates, while the mendicant orders, following the example of St. Francis of Assisi, have instituted what are known today as "Secular Orders." The members of these secular orders are men and women, who wish to develop their spiritual life by a closer association with the spirituality of the religious order to which they are attracted. They may be married or single, but must be fully practicing the teachings of the Catholic Church.

The Secular Order of the Discalced Carmelites, as its Constitution states, welcomes those of the faithful who, by special vocation, undertake to live in the world an evangelic life of fraternal communion imbued by the spirit of contemplative prayer, in imitation of the Virgin Mary, and animated with apostolic zeal according to the example and the teaching of the Carmelite saints. Perhaps the best known of the Carmelite saints is St. Therese of Lisieux, the "Little Flower," who died in 1897.

Contact us by using our convenient online form, or you may visit our staff directory.